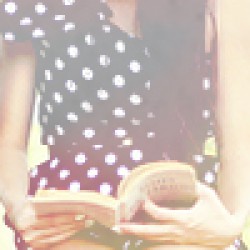 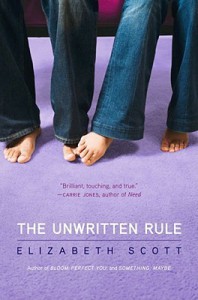 (I would like to add that um, ANY book that has two people playing barefoot footsie on it repulses me immediately, and honestly, I couldn't expect anything more than two stars with that image in my head every time I picked it up.)

This is yet another book I read almost two years ago, and I don’t remember it incredibly well. However, I do remember that this was cliché and used a dreadful stream-of-consciousness style narration that made Sarah, the main character, seem immature and incompetent.  (Yet another reason I despise present tense writing.)

The vast majority of this book is actually painful. Sarah is obsessed with Ryan, and her inner mind theatre is just a compilation of everything she loves most about him. She’s constantly thinking about him, obsessing over him, and wondering what it would be like to be with him. She is absolutely convinced he feels the same way for her (and because it’s a good ole stereotypical YA novel, he does), but they tiptoe around for stupid reasons. Ryan is actually the one I dislike the most in all this because his confession to Sarah is that he’s always had feelings for her, but decided to date Brianna anyway. I absolutely don’t understand that logic, and I have no sympathy for his “dilemma.”

The above encompasses about 95% of the plot; however, I decided to give this a two-star rating because The Unwritten Rule focused quite a bit on the actual friendship between Brianna and Sarah, and how destructive it really was. I have been in hurtful friendships before, and while I never had friends quite as cruel as Brianna, I sympathized with Sarah’s situation (outside of her whole trying to steal Brianna’s boyfriend thing). At the end of the novel, I felt like the story’s ending, while happily-ever-after in that Sarah and Ryan end up together, still has the friendship at the forefront. Sarah gets Ryan, yes, but the bigger thing she gets is freedom from a toxic friendship, and the realization that just because you’ve been best friends with someone for a long time doesn’t mean you need to stay friends with them forever. This was a lesson I had to learn in high school, and I felt like Scott could have been really successful if this story was about Brianna and Sarah, with Ryan floating somewhere in the background.

Overall: This wasn’t really a good book, although it ended up with a pretty good lesson in the end. I definitely wouldn’t recommend it because Sarah’s narration will make you want to stab something, but it definitely wasn’t as bad as it could have been. I have all of Elizabeth Scott’s books on my to-read list, and this one doesn’t make me excited to get to another one anytime soon. However, I think there’s potential, and maybe I just need one with a less cliché plot in order for it to really click for me.